It is common to get strange looks from people I talk to about taking infants to the chiropractor. I know what is going through their heads: Is it safe? Babies don’t have back pain. Do babies get adjusted the same way I do? These are legitimate concerns for any parent, but to answer them I will begin with the most important question: Why? Please read this comprehensive article below: 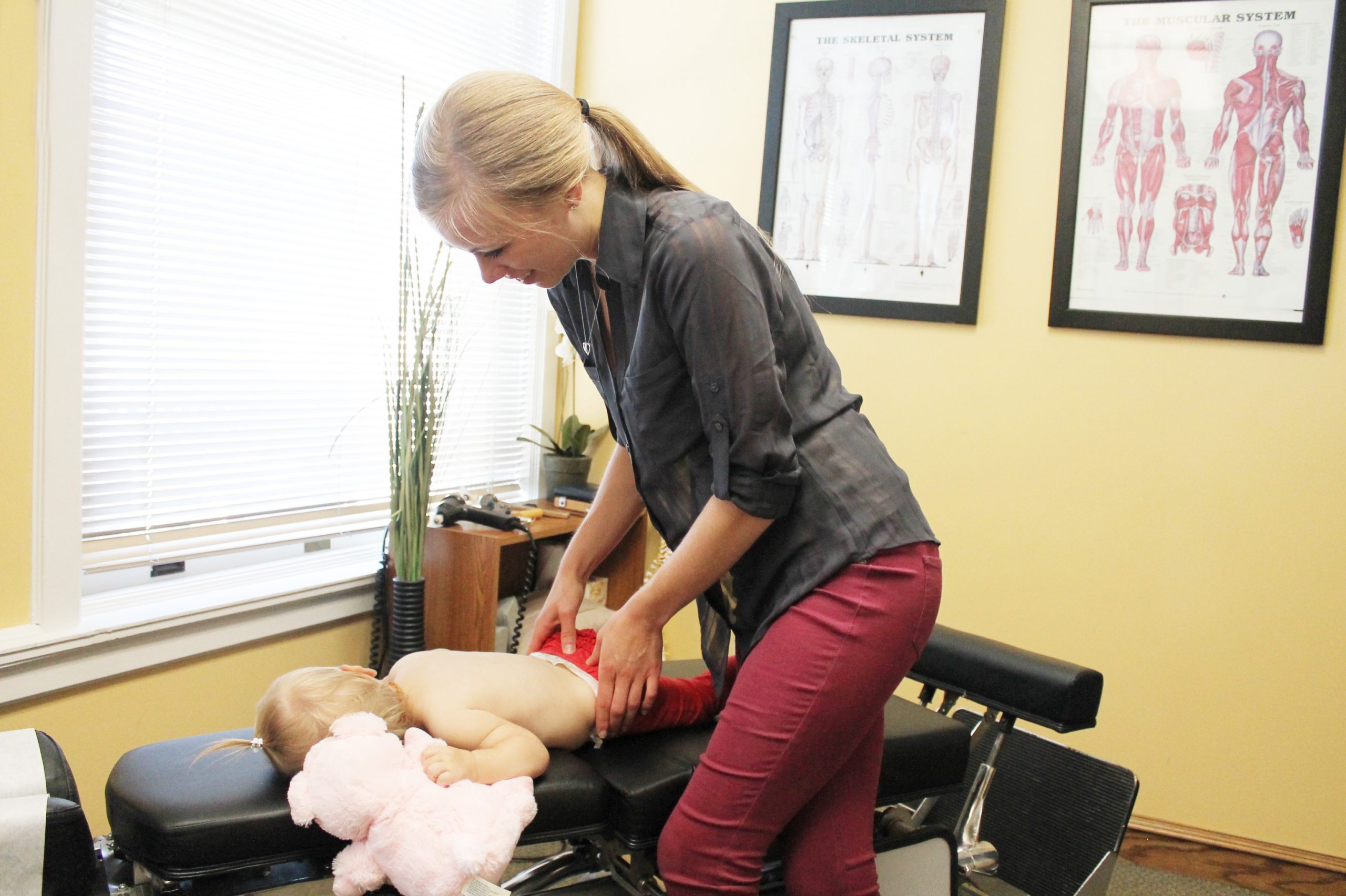 Being born is tough work. There are a lot of pressures and forces being exerted onto your baby during her journey into the world. A recent study by Viola Frymann demonstrated that 90 percent of newborns suffered the effects of birth trauma: associated strain through the neck and cranial areas following birth. Frymann, an American osteopathic doctor, studied more than 1,500 babies periodically across an eight-year period. She examined all babies within the first five days of birth; in fact, many were checked within the first 24 hours of birth. This study revealed that approximately:

Left uncorrected, this trauma continues to impact a baby’s spinal growth and development, reducing the healthy function of her nerve system. This can cause many health challenges later in life that could easily have been prevented.

Birth in its many different forms can be quite traumatic. While each birth is unique, there is always a chance that the baby suffers some sort of strain due to a variety of reasons. Even the most natural births can result in trauma that goes undetected. As researcher G. Gutmann has written, “The trauma from the birth process remains an underpublicized and therefore significantly under-treated problem.”

What Can Cause Birth Trauma?

Birth trauma often causes neurological dysfunction. In fact, a study by Gutmann examining more than 1,000 infants concluded that approximately 80 percent had some form of nerve dysfunction. This is of utmost importance since 65 percent of neurological development (brain and nerve system) occurs in a child’s first year. During this crucial time, it is vital that the nerve system be healthy so the child can grow and develop to her potential.

What can nerve dysfunction from birth trauma look like?
​

Chiropractic care is focused solely on removing nerve dysfunction (which improves brain-body communication) so a new baby can grow, develop, and function at its highest potential. We as humans were born with an innate ability to heal. Chiropractors minimize the obstructions to that ability.

A baby’s spine lengthens by 50 percent in his first year. At no other time does this growth happen so rapidly, so you want to make sure your baby is in proper alignment, ensuring proper symmetrical growth.

The Hueter-Volkman law states that bones change shape with pressure by slowing bone growth in response to pressure (compression forces). Any spinal misalignment changes the balance of pressure across the spinal bones and can lead to asymmetric bone development. This is the difference between having a spine like a straight, strong oak and having a spine like a crooked tree.

The first year of life is also the time of spinal curvature development. There are curves called lordosis present in your neck and lower back, and curves called kyphosis in your mid-back and sacrum. These spinal curves are necessary for movement, balance, upright posture, protection, and shock absorption. Without being in alignment during this crucial time, a baby’s spinal curves may not develop properly—giving him a poor foundation for later in life.

Remember: If your baby’s spine stays out of balance, it can put tension on the nerve system.

Is it safe for infants to get adjusted?

Yes. Adverse events linked to pediatric chiropractic care are virtually nonexistent, estimated at 1 in 250 million pediatric visits. There is not a single medical procedure safer than that, but I would encourage parents to seek out chiropractors who routinely take care of children in their practice.

When adjusting a newborn, a skilled chiropractor will only use the amount of pressure that you would use to comfortably push on your eye. The child gets checked by hand and with technology, then is placed in position (usually in Mommy’s lap), and gentle pressure is applied. That’s all there is to it. It’s simple, safe, and effective.

Two major studies on chiropractic and infantile colic have shown that over a period of two weeks (usually three visits) 94 percent of babies adjusted by chiropractors showed a successful rating, with 25 percent showing improvement after the first adjustment. Dr. S. Vallone, in a 2007 study, concluded, “Chiropractic adjustments in the early stages of neurologic imprinting appear to safely and effectively address the craniocervical dysfunction and help restore natural, efficient suckling patterns for infants who are unable to successfully latch.”

Better immunity through a healthy spine and nerve system

A leader in psychoneuroimmunology, Dr. Candice Pert, credits chiropractic as having a significant effect on maximizing immunity via maintenance of a healthy nerve system. A pilot study examined the relationship between the intensity of chiropractic care and incidence of childhood diseases. The results showed that children who went to the chiropractor more than seven times per year had an increased resistance (immunity) to common childhood diseases.

Many parents, myself included, have their children checked regularly by chiropractors as part of a healthy lifestyle to help them develop to their potential. Chiropractic is a safe, gentle, and effective way to address nerve dysfunction and promote overall wellness in the newborn and growing child.